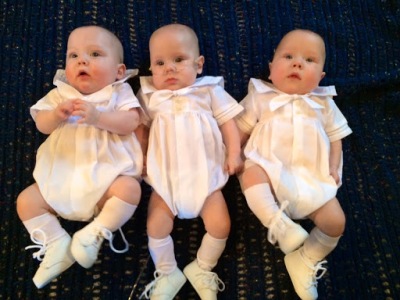 This post is a few months late but I want to share about the boys’ Baptism. Of course we didn’t do this like normal people. Shocking I know!
We had the boys baptized in the NICU early on actually. Monsignor came to the hospital several times during our NICU stay and we asked him to go ahead and baptize the boys when they were still really sick. Mason and Logan were baptized on May 14 right before Logan’s PDA ligation (Mason’s was the next day). James was baptized on May 20. He was still at UAMS when Monsignor came to Children’s to baptize Mason and Logan. Monsignor actually rushed to the hospital for Mason and Logan and we had the surgery team wait so we could do the Baptism first! Monsignor did the blessing with water part of the Baptism in May.
We had our Baptism ceremony on November 30. I can’t remember what Monsignor called it but he did everything except the water part. (This really confused some of the kids who came, including our little neighbor!) Monsignor asked us to do the Baptism during a mass so we did . . . and we sat on the front row with 3 7 month olds! They did great though (and slept through most of it).

Here’s some pictures from the ceremony: 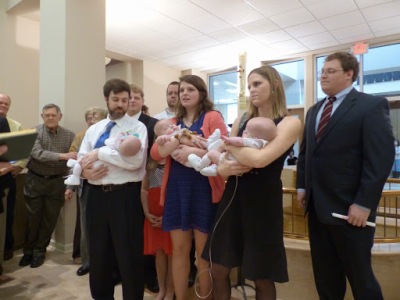 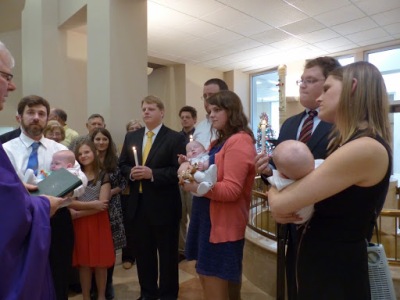 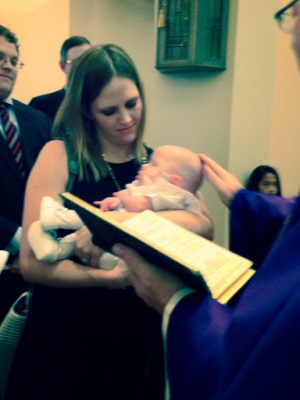 And of course Monsignor called us up to the altar at the end!

I’m terrible and forgot to get pictures of the boys with their godparents! But we decided to have 3 sets of godparents so each of the boys has his own.
Then we had a little party at our house. We felt so loved! Thanks to everyone who came to celebrate with us! I didn’t get many pictures either. Actually ALL of these pictures are basically from other people!

Here’s some pics of the boys in their super cute Baptism outfits:

And some outtakes from the group shot (mostly just pics of Mason with his hands in his mouth): 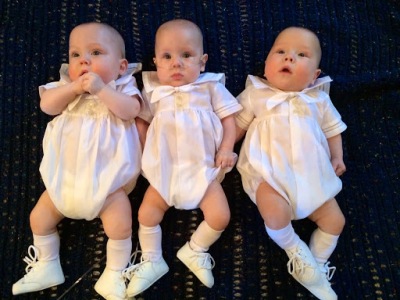 And of course my mom made us take family photos because we were all together. They didn’t turn out great. I look great of course but the rest of my family needs to work on their photogenic-ness (yes that’s a real word in my mind). 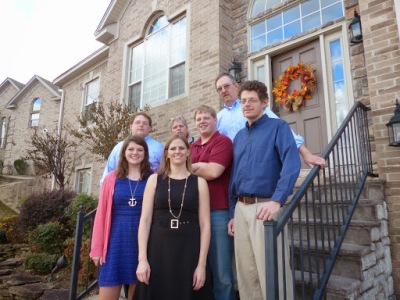 And one of my favorite gifts that we’ve received for the boys: 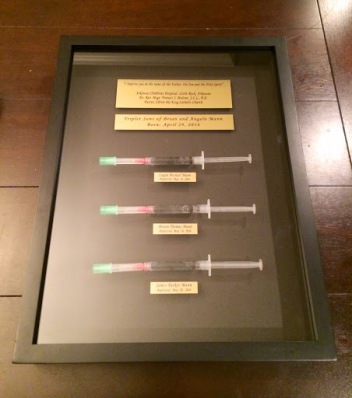 Monsignor surprised us with this a few weeks ago (see it’s a good thing that I waited so long to write this). We were at mass one weekend and Monsignor pulled me aside at Communion and asked me to hang around and see him after mass. I’m not gonna lie I was a little worried! I’ve never been asked to stay after mass to talk to the priest! Ha! Well this was for a good reason as you can tell! Monsignor saved the syringes of sterile water that he blessed and used to baptize the boys in the NICU and he put them in this shadow box for us! I LOVE IT!!!
Thanks for your patience on this post! And thanks everyone who took pictures and sent them to me!