Big day! Mason and James came off oxygen today! We can see their faces finally!

I can’t stop staring at them! They’re so cute! But we knew that already!
So let me back up. We’ve had a pretty busy week. James is still in NICU . . . But . . . We have a plan and we’re making major progress! Mason and Logan had their first appointment in the High Risk Newborn Clinic today so we have updates for them too!
Current stats:
Mason – 9 lbs. 8 oz. (10th percentile)
Logan – 8 lbs. 4 oz. (under 3rd percentile)
James – 9 lbs 8 oz. (also 10th percentile)
So like I said above, Mason and Logan had their first follow up in the High Risk Newborn Clinic this morning. I don’t know if all hospitals have this or not but the clinic follows up with NICU patients to make sure they stay on track. I’m pretty excited that we get to do this. And we got to see Dr. Peeples too! I know I’ve said it before but we love Dr. Peeples! (Side note: I found out recently that she would call the NICU to check on the boys when she wasn’t on service. So sweet!)
Anyways, this appointment was basically just to make sure everything still looks good and to check on our oxygen. Mason and Logan did great! And they seemed to like the exam table.
We had to wait a while but they were so good! They both slept some:
No major issues today. We will get developmental screening done in another few months to see if we need any type of therapy. Right now their adjusted age is less than 2 months so they really shouldn’t be doing much. Which means they can’t really be much behind if at all.
Biggest news from clinic is that Mason gets to lose the cannula!! We’re starting with no oxygen during the daytime then in a few weeks we’ll try no oxygen at night too. We get to keep the pulse ox monitor so we’ll know if he really needs it. I hope not! I love seeing his sweet face! 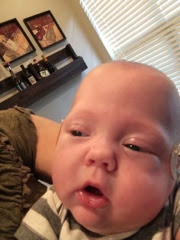 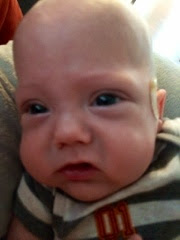 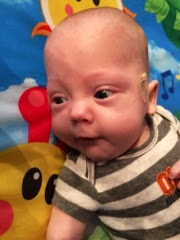 Here’s a few pictures from earlier this week: 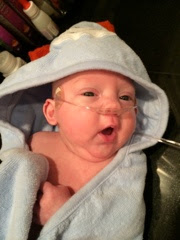 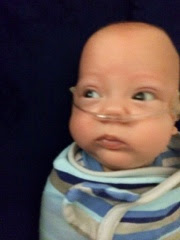 And I got one of Mason and Addison with Mason smiling! 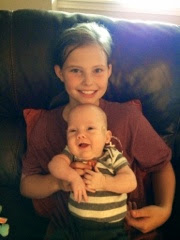 Logan is doing well too but he still needs his oxygen. In fact Dr. Peeples checked his blood gas today and it wasn’t great. So we’re going back to see her again Monday to make sure he’s ok. I think he probably is. He was acting up this morning and his o2 was all over the place around the time they drew the blood. So positive thoughts for Monday!
Logan has been a character this week. Here’s a few pictures: 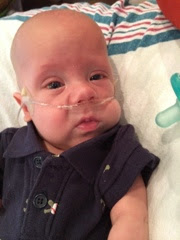 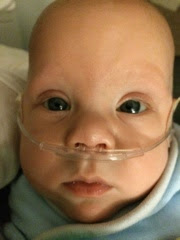 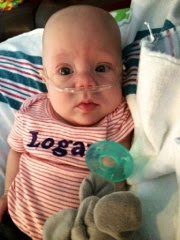 James had had a great week! We’re finally going somewhere! Dr. Ross is back this week for a guest appearance at ACH and he decided it’s time to do something. James was doing ok with his feeds but he just wasn’t progressing like he should. And he would not take his entire bottle! And Andrea, James’s occupational therapist, noticed that he was coughing while taking his bottle so she recommended a swallow study. (Side note: we love Andrea too! And she’s leaving next week and we’ll miss her!) The swallow study is done in radiology. They put barium in the bottle and try different levels of thickness while they watch on X-ray. James didn’t fuss at all and he was very cooperative. I think he liked the chair! 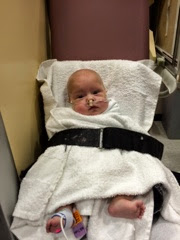 The swallow study showed that James aspirated on every thickness except “stiff honey,” which is really thick! That means he was getting milk into his airway when he swallowed. Not good. Kind of like when you drink something and it goes down the wrong pipe. Over time this can cause pneumonia or otherwise make his chronic lung disease worse.We were pretty disappointed that he didn’t do better. But it’s good that we know! James is a “silent aspirator” so we would have never known until it was too late.  So James will be drinking super thick (almost pudding like consistency) bottles. We’ll do a follow up swallow study in 3-6 months. The good news is that James seems to like his bottles super thick. He’s taken every single one in record time since we started the thickened feeds!
In other James news, I walked in this afternoon and found him without his cannula! (I know I said this before so it’s not that exciting a second time but it is to me). I’ve been asking to try him without it and Dr. Ross went for it! Thanks Dr. Ross! So far James is doing pretty well without it! Let’s hope it continues! Once he gets to full feeds by bottle, he’ll be tube free!
We haven’t heard the “h word” officially yet but it may be soon! James just needs to get to where he takes all 8 bottles and tolerates that much thickener (it can cause belly issues like constipation or diarrhea) then we should be good to go! Fingers crossed super tight!!
Here’s a few pictures of James. He’s a cutie! 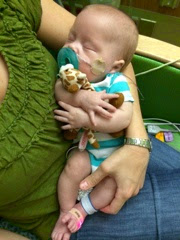 Oh and I’m a little sad this week because the boys are starting to outgrow their newborn clothes! I’ve had to retire a few things! So they’re starting to wear 3 month clothes. And size 1 diapers! So big!!
Hopefully James comes home soon! We miss him here!